skip to main | skip to sidebar

Sheesh, Elle can go missing for a week or so and then she's gets all 'clingy' when I go 'silent' for a couple of days ;) 'the girl' has every right to question though as she is extremely reliable regarding her 'posting commitments' ;)

I do apologize for my recent lack of communication.......nothing in particular, just a little busier than usual.

I'll do my best to recap here.

Thanksgiving was nice, boring but nice. My daughter, to my surprise, did ditch her other 'option' and showed up in time for TG dinner. Besides being extremely happy with that, she had to fulfill her 'granddaughter' obligations by listening to my Mother ask her every question under the sun regarding 1. School, 2. What boy she's currently seeing (what does he do? where did she meet him? where did he go to high school? has she met his parents? etc etc) 3. Why doesn't she eat more....'you're too thin'.

Me...I just listened and gave her my 'sly wink'. To her credit, she took it all in stride and answered the most of the questions, some I knew, 'semi-truthfully' ;)

Food was good except I think most people would have preferred to have the dressing served with dinner. Fuck.....I had the stove (new stove) timer set for the turkey. On timer setting 'auto', when the timer goes off, the stove does as well. I didn't know this fucking aspect so when I put my dressing in, the stove had turned itself off....and I didn't notice. When I realized this, 40 fuckin minutes later, I was obviously behind schedule. I first tried to blame somebody, anybody, for fuckin with the stove. Then....the timer function was pointed out to me ..well fuck, to my way of thinking that should have been pointed out BEFORE....not after! Oh well.....everything else was good and the dressing was served, albeit late.

My pies were good 'cept for some reason the Pecan was alittle runny...wtf??? Never had that happen before. It was eaten so I guess not too bad.

Since I don't do Black Friday, most stores were offering their sales online beginning TG day. There was a TV that I had been wanting for the bedroom and found it on sale at several stores but the only one that actually had it in stock of all places, was Sears. So, I order it online, so proud of myself for 'beating the game' and avoiding getting crushed to death by trailer-livin trash.

That was until Friday morning when I received an e-mail from them saying "We're sorry, but even tho we said we had it in stock, we fuckin lied to you but would like to offer you a few 'bait and switch' items instead for only a couple of hundred more. Please make your selection and we're fairly certain we have these in stock, but if not, we'll send you an e-mail telling you how we fucked with you again...thank you for doing business with us and affording us the opportunity to really fuck up your day...Sincerely, Sears.com"

I gave everyone Friday off but I came in to work and actually got a ton of things done. Phone rang twice in the 4 hours I was there. I enjoy coming into work the day after TG. Peaceful without gettin all obsessed as to why the phone isn't ringing.

I left work and went to find my TV somewhere. Surprisingly, by 1:00 PM the big crowds had thinned enough that it wasn't too bad. I found the TV (not in stock but they said they would have it in by Sunday). A girl at SV was looking for a Blu-Ray player as a Christmas gift for her husband. I found one there on sale, called her and ordered it too (again, not in until Sunday). The sales guy said I could either pay 10% down OR pay the whole thing up front. When I asked why would I want to pay in full for something I didn't have yet, he said "Because it will save you time when you pick it up". WTF???? When I said "Uh....what if for some reason you never get that TV or Blu-Ray in? How much fuckin hassle would that be for me"? Then he says "Ok...I guess you'd prefer the 10% down? Arrrgh....

Then I tell him to ring the items separately. This fuckin moron then says "Well, that will actually cost you more money down".

Me: What does THAT total up to?

Picked up everything on Sunday and quite frankly, was very much surprised that the items arrived as I was told they would. Oh, I did have a 'situation' with a guy who butted in front of me at the 'Customer Pick-Up' dock.......but this post is long enough already ;)
Posted by Efen at 9:08 AM

Your lucky mister, don't make me miss you like that again. Funny story, by dressing do you mean stuffing, God you people from other states talk funny. Harrassed Mom calls traffic lights robots !!!! If it is stuffing I had the same blooper, only mine was done, but I never served it. We are blaming it on the wine.

You daughter sounds awesome, good little girl she is.

Have a groovin day, and I hope your phones ring off the hook. XXOO

Hehe...uh no, I don't mean stuffing. Stuffing is when you put it in the bird...dressing is when you make it separately. Sheesh...you folks up North ;)

We always called it dressing growing up, too. Glad you had a nice holiday.

Well sorry, I get all confused when people call gravy-sauce and sauce-gravy...See we people up North put gravy on our potatoes and sauce on our spaghetti, ya know what I'm saying? You could have called the stuffing dressing -and you made homemade dressing? I'm coming to your house next year.

Its "stuffing" no matter how you serve it (or don't serve it, if you're at Efen's house.). And that's just because I say so ;)

So wait a minute. I just re-read your comment. So you did mean Stuffing - you know like Stove Top and shit. Dressing is something you put on salad, I forget where your from, so I don't have a cocky comment regarding your geographical location, I'll get back to you with my insult later.

ETW: You were raised correctly :)

the girl: NO...I DID NOT mean stuffing and I certainly DID NOT mean Stove Top. What I meant was dressing...and I meant I made it from scratch...no box stuff (ing;) for me. Uh...now you got it?? ;);)
Oh...we put the other kind of dressing on salads ;)

(Better...honey?). And yeah, its still stuffing.

I am constantly amazed by people and their inability to do math. Heck I've seen people with the inability to count...

Oh, on the food stuff, call it whatever you want as long as I get some of it.

And....I don't need you raising those eyebrows at me about the TV....too!

If electronic gadgety things are my only vice, then..well....ok, its not but I'm not going to try to justify this......again.

Ron: I agree. Some people ought to sue their schools.

Thank Goodness you're back..you were missed! :) What a moron (salesperson) - even I have better math skills than that - & trust me, that ain't sayin' much! Glad you had a good turkey day...can't wait to hear 'bout the guy buttin' in front of ya - you know you got to post about that,right?? Can't leave us hangin' & all....

Thhhpppptt....anybody who knows me, knows I don't "do" math. It's all hard and stuff. Besides, it wasn't that I COULDN'T do it...I just wasn't paying attention ;)

And I wasn't "raising my eyebrows" at you....you can have all the shiny electrical stuff you want...it's fun to be Efen, isn't it? ;)

Is it cornbread dressing? Can I have the recipe? I do Stove Top for my crew because they like it, but I like homemade and my mom's recipe died with her (unfortunately).

You know what some people also call dressing? Miracle Whip. I call it EAR WAX. Nasty. 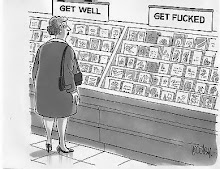 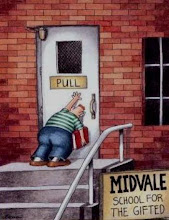 Efen
I'm usually grumpy and pissed about something which my language reflects in my posts. I have no tolerance for stupidity, those that refuse to be accountable for whatever dumbfuck things they did, and those that think the world owes them just because they simply exist. My passions: Baseball, most any book by Stephen Hunter, my job (most of the time) and............boobs ;) BTW...if anyone has anything they'd like to e-mail me, here ya go: Cardsfan53@hotmail.com

Hot Chicks Who Write Funny Shit..and A Couple of Guys (I have no idea if they're hot or not)